Marketing, as a concept, is ancient. It’s as old as the idea of selling something – and telling people why your thing is better than that guy’s thing, so they should buy yours.

In the last two decades, it’s changed more than ever before, and it’s going to continue to evolve ever more rapidly.

If we want to guess where we’ll be in the future, we need to look at the past.

The Evolution of Marketing: How We Got Here and Where We’re Going

The single biggest factor that drives how marketing evolves is technology. Our species’ technological capabilities are growing exponentially, as new inventions and discoveries lead to even more progress.

This explosive growth regularly changes our lives profoundly, and marketers need to be ready to adapt rapidly or be left in the dust.

The pace of these changes has accelerated dramatically in the last two decades, but we need to set the scene first, because modern (and future) marketing was actually precipitated earlier than that.

The Advent of the World Wide Web

Today’s marketing is overwhelmingly performed online. Without the internet, none of it would be possible.

It all started in 1989 with a computer scientist named Sir Tim Berners-Lee.

If you haven’t heard the name, you should know it, because he changed your life: he’s the man who invented the internet.

All because he was annoyed at how difficult sharing information at his workplace was:

He outlined an idea he had to solve this problem in a document called “Information Management: A Proposal”. This idea would become the web – and it wasn’t accepted right away. In fact, his boss at CERN gave it back to him with the words “vague but exciting” on the cover. 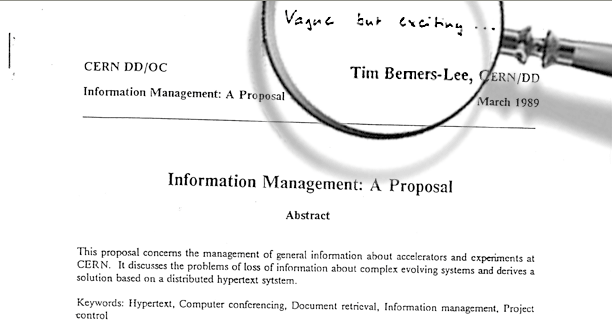 While it wasn’t an official project, Tim’s boss was able to give him some time to work on it in September 1990.

By the end of that year, the first web page was officially launched, and in 1991, people outside of CERN were invited to start using it.

In 1993, CERN announced that the underlying code of the web would be made publicly available and royalty-free, forever. It’s fair to say that that decision is responsible for how marketing works today – not to mention our society as a whole.

In 1994, Netscape, the first web browser was released, and made the internet much easier to use. E-commerce sites Amazon and eBay emerged as well, drawing more and more users to this exciting new technology.

Most importantly (from our perspective as marketers), search engines like Yahoo and Google appeared.

With websites and search engines now publicly available, marketers wasted no time figuring out how to get their company’s pages in front of potential new customers.

Search engine marketing was born, and it was the Wild West all over again – practices we know today as “black hat SEO” were rampant. It was all keyword stuffing, link spamming and over-tagging.

For marketers, this new technology represented a whole new level of potential. Email became a marketing channel, and is still one of the most widely-used tactics today.

Turn of the Century

The year 2000 marked the start of a much quicker evolution of marketing. It was discovered that digital information was the most rapidly-growing type of data.

This was the start of what’s known as big data. The reason for the name is simple – there’s just so much data out there. In 2000, physical data storage (paper, film, optical media like CDs) was steadily being replaced by digital storage.

The concept of “big data” means, basically, that there’s so much information generated that it’s possible to identify and track trends and patterns generated by actual human behavior. It’s become an industry in its own right, with companies specializing data-driven marketing becoming more and more common.

The idea is that using predictive analytics, this immense wealth of information allows companies to make smarter decisions on connecting with their customer base and strengthen relationships. You can predict market trends, product impacts, and much much more.

Many other companies lost huge amounts of stock, but eventually recovered. Companies like Amazon and eBay took a hit but recovered quickly.

At the same time, marketing as a practice changed. The previous era’s style of marketing was sales-oriented and aggressive. 2001 saw the beginnings of a board shift over to inbound-style marketing.

This meant that contacts were seeking out companies through their content, rather than the other way around. This is a tactic that we’re still seeing widely used today.

As technology’s growth raged on, it was clear that marketing wasn’t only going to happen through search engines, and traditional, terrestrial means.

The connecting of computers through the internet brought with it the desire for people to connect with each other via those computers.

The rise of social media meant that we could connect with, follow, poke, share with, and send memes to everyone in our lives.

In 2002, LinkedIn was launched as a way for professionals to connect with other people in similar spaces. Not far behind was MySpace, a platform that took similar ideas, but on a more personal level – the first real, widely-used, modern social media space.

In 2004, Facebook launched and would eventually take over as a social media giant that has yet to be overtaken – social media was no longer just for younger audiences. Your mom, grandmother, and probably even your dog all had Facebook pages. In 2007, Twitter joined the scene allowing people to share ‘microblogs’ consisting of 140 or fewer characters, and no shortage of galaxy-brained level takes were shared.

What we maybe didn’t realize at the time of these social media platforms launching was, these weren’t only places where we could share ideas, jokes, video, and opinions with one another, these were also extremely viable advertising platforms.

Platforms like Facebook’s Ads manager allows businesses of all sizes to reach prospects on a scale that would have been unfathomable just ten years ago!

Smartphones are a crucial aspect of marketing today, but it’s important to remember that they’re an extremely recent addition to the digital marketing scene.

If you’re a millennial like me, congratulations. You probably remember having to hit the ‘9’ key four times on your flip-phone keypad so you could start texting the word ‘sick’ in response to your friend Brad who just told you that they unlocked Mewtwo in Super Smash Brothers Melee. It was not a fertile device for digital marketing.

However, as technology improved, phones (obviously) got better. Touch screens were implemented, internet and video capabilities were added, the actual phone part of the phone got worse there for a while, but they mostly figured that out too.

The first iPhone wasn’t unveiled until 2007, and honestly, it’s hard to even remember a time before that, because not only would it inform the direction that apple took from then on out, it influenced the design of nearly every phone manufacturer on the market.

Phones were rectangles now – either get with the program, or fall by the wayside.

This homogenization was actually great for digital marketers, though. This meant that phones would interact with platforms like Facebook and Twitter the same way. They’d access these websites through native apps, and developers could focus on making these as similar as possible. Plus, people started to access these platforms on their mobile devices in much higher numbers than anywhere else.

This meant that marketers would advertise their products on social media platforms, but design their ads for smaller screens.

So Where are We Going?

It’s clear that digital marketing has changed over the last few decades. With the exponential rate of technological improvements, digital marketing is changing on a near monthly basis, but there are some constants.

Search engine marketing (SEM) won’t go anywhere. After all, search engines are how most people find their information these days, but there needs to be a shakeup. The space is becoming far too crowded with competition. It’s getting harder and harder to advertise on a platform that’s oversaturated, especially when Google pushes quiet updates all the time.

Social media also isn’t going anywhere, though there will be a greater emphasis on privacy. It will be the responsibility of the platform holders to ensure that peoples’ privacy is handled with the utmost priority, as that has clearly become a hot button issue (in as recent as the last year).

It’s also very likely that we’ll see a shift to social media as the best place to carry out your inbound efforts over the traditional content marketing method.

Speaking of which, it’s extremely likely that outbound marketing will experience a bit of a renaissance.

It’s clear that inbound is still a trendy marketing buzzword, but like SEM, the market is virtually flooded with brands going after the same keywords, topics and ideas. Outbound has never gone away, but it has evolved to meet the needs of the modern marketer (think Google Ads, social media advertising and cold email).

It stands to reason that as inbound becomes more difficult to carry out effectively, people will start to shift back over to outbound methodologies to reach out to contacts at a larger scale, as these methods are extremely effective.

Linkedin
← Outreach Email Automation 101: What It Is and Why You Need It
Developing a Rock-Solid Email Engagement Strategy →